One is spoilt for choice, just a few suggestions…

Kilmallock, Co. Limerick, is set in the valley of the River Loobagh and nestled at the foot of the Ballyhoura Hills to the south with the Galtee mountains to the east. It is an attractive town of great cultural and heritage value, deriving its name from a monastery founded there by St. Mocheallóg in the late 6th/early 7th century. The medieval town was a major centre for religion and subsequently for trade and commerce becoming second only to Limerick City in the region. It was also politically significant as it was a stronghold of the Earls of Desmond. This dominance is evident in the wealth of medieval buildings that survive to the present day creating a unique urban landscape. These include the 13th century Collegiate Parish Church and the Dominican Priory, over 1200m of medieval town wall, including a town gate, the 15th century King’s Castle standing astride the main street and 16th century houses of the wealthy town merchants.

Lough Gur is one of Ireland’s archaeological and historical gems. The beautiful and enchanted lake lies 21 km south east of Limerick city.  From the level surrounding countryside it unfolds in beauty its placid waters and rugged hills – a fairyland of stone circles, ancient habitation sites, megalith tombs, crannogs and castles.  Lough Gur tells the story of the pre-Celtic settlers who first came to the area over 6,000 years and continues to the present day in the people who still dwell and farm in the locality. It is an archaeological site of outstanding significance. A visitor centre was built in 1980 and uses the design of two of the excavated stone age houses as its plan. The Centre houses a number of displays covering stone age and bronze age implements, pottery and weaving. A slide show gives a good overview.
The location is very pleasant with a car park and a picnic area. A gradual shore-line is present at the visitor area, with a shallow section of lake reaching up to the maintained lawn. As a result, the area is often used for water sports. Motorised craft are banned on the lake.

Snuggled in a wooden and lush countryside setting, Adare is widely regarded as being Ireland’s prettiest and most picturesque village. Situated on the river Maigue, a tributary of the Shannon river, Adare (Gaelic name: “Ath Dara” - the “ford of the oak” - from the combination of water and woodland) dates back, at least, to the early 13th century. During its long history, Adare, as a strategic location, has been the subject of many conquests, wars and rebellions.  In the early 19th century, the Earl of Desmond, laid the plan for the existing streets and townhouses of Adare. These lands and dwellings were rented to tenants, under various agreements, some of which still exist today.  Today, Adare village is an architectural wealth of scenic beauty. Adare’s streets are lined with original thatched cottages survived for hundreds of years. Some of the cottages are kept by local restaurants and Arts & Crafts shops, but many are still privately owned. The mix of centuries is blended into everyday life. The main street of Adare is punctuated with beautiful stone buildings, medieval monastries and ruins and the picturesque village park.   Take a stroll though Adare’s streets and become transported in Ireland’s history.

Ballyhoura Country, an ideal holiday location, is situated in Limerick County. The area offers a vast array of tourist attractions. For the outdoor minded Ballyhoura Country offers the widest range of leisure and sporting amenities imaginable. Go quad biking, abseiling, windsurfing, orienteering or rock climbing or why not go walking and birdwatching. The Ballyhoura Way is part of the O’ Sullivan Beara Trail and stretches 90km from St John’s Bridge in North Cork to Limerick Junction railway station in County Tipperary. An attractive and varied route through the lush pastureland of the Golden Vale, wild countryside mostly on ‘ green roads ‘, along forest trails, driving paths and river banks, across the Ballyhoura Mountains and through the Glen of Aherlow.

Ballyhoura Mountain Bike Trails offer the largest trail network of it’s kind in Ireland. 98 km of trails including forest road climbs, tight twisty singletrack with loads of ups and downs, board walk, tight turns and technical rocky bits are gauranteed to leave you smiling. The trails range from the moderate 6 km Greenwood loop to the demanding Castlepook loop, over 50 km in length! Facilities at the trail head include map boards, car parking, toilets, showers and bike wash facilities. On arrival there is a secure car park with monitored CCTV cameras. There is also snacks and tea and coffee also available for a reasonable price. Trail accomodation, bike rental and good food are available locally.

Doneraile Park is well worth a visit.  The Park comprises approximately 166 hectares and is an outstanding example of an 18th century landscaped park in the ‘Capability Brown’ style. Mature groves of deciduous trees, several restored water features and a number of deer herds can be viewed along the many pathways within the Park. The pathways are generally accessible for people with special needs. Doneraile Court, the former residence of the St. Leger family, is situated within the Park. It will be opened to the public in the future, following completion of necessary restoration and safety works.  Doneraile Tea Rooms, the focal point of atmosphere, wonder and ambience inside the ancient walls of Doneraile Demesne, opened recently. Be it, for a quick cessation during your morning walk, or an extended stay to absorb the history within the walls of Doneraile Court, the Tea Rooms is now open.

The Glen of Aherlow

The Glen of Aherlow is a picturesque valley nestling between Slievenamuck and the Galtee Mountains. It is a quiet country valley, stretching through sixteen miles of unspoilt countryside affording some of the most breathtaking scenery imaginable making it one of the most desirable holiday destinations in Ireland. The Glen offers walkers everything from low-lying strolls along verdant river banks to high-level hikes through the Galtees – and everything in between. There are eight looped trails on offer, ranging from a half hour to four hours. These loops start from two trail heads – Christ the King and Lisvarrinane Village.  For those looking for gentle outings or with kids in tow, a foray into Aherlow Nature Park with its oak, Scots pine and beech trees, is a treat. Keep an eye out for the many animals and birds, such as foxes, red and grey squirrels and blackbirds.   If you want to push yourself a little more, you may prefer the two Lake Walks which take you into the Galtees. A trip to Lough Curra and Lake Muskry will ensure superb views of corrie lakes, wooded foothills, mountain streams and open moorland. These walks usually take up to four hours.   The Glen of Aherlow not only offers Walking & Trekking but also The Glen of Aherlow Nature Park, Cycling, Heritage Sites, Horse Riding, Fishing, Golfing, Hang-gliding & Paragliding

Lough Derg, situated on the River Shannon, is the third largest lake in Ireland. It is the most southernly of the Shannon lakes and its shoreline is shared by three counties. It runs for 40 km (25 miles) from the Galway town of Portumna to the twin settlements of Ballina-Killaloe. Situated on the banks, Killaloe is well known as the birthplace of Brian Boru (c. 941 - 1014), and High King of Ireland,(1002 - 1014). While Brian was High King, he ruled from Killaloe making it the “Capital of Ireland.” The towns of Killaloe and Ballina are amongst Ireland’s most picturesque attractions and are linked by a 13 arch bridge, which links not only the two towns, but also the counties of Clare and Tipperary. St. Flannan’s Cathedral, unique for its stone carving inscriptions is in Killaloe, while both villages host restaurants, galleries, pubs, and shops as well as a Sunday Farmers Market. Step on board one of Killaloe’s passenger boats, in their idyllic setting on the shores of Lough Derg. They offer breath-taking views of the counties, and provide sight-seeing tours on Ireland’s finest waterway, the River Shannon. The relaxing tour is accompanied by a captain and crew. Enjoy lunch at one of the many waterfront restaurants.

Michelstown Caves were discovered in 1833 when a farm labourer called Michael Condon was quarrying limestone and dropped his crowbar into a cavern.  On the 13th September 1875 Timothy Mulcahy became the owner of the farm on which the cave is situated. Mr Mulcahy took a keen interest in the preservation of the cave.  Fortunately the cave has remained in the family ever since. Major work was started in the cave in 1969. Electricity was installed in 1972 making it the first cave in Ireland to have an electric lighting system. The result is a wonderland of muted colour. The cave is now open daily throughout the year and the temperature remains constantly at 54 fahrenheit.  Mitchelstown Caves are located in county Tipperary 12 kilometres east of Mitchelstown. The tours are approximately 2 kilometres in length going through several caverns with examples of different types of formations many of which are given colourful names.  The limestone being dissolved by rainwater percolating through the soil and stone is redeposited in the cave as the drops of water evaporate in the air forming stalactites, stalagmites, calcite columns, and flow stones among other examples of formations which are to be seen in the caves. Considering that it takes over a thousand years for a stalagmite or stalactite to grow a few centimetres the formations found in Mitchelstown Caves are highly impressive. Examples of 350 million year old fossils are to be seen as well as some cave fauna.

"BRILLIANT!!!!!"
We absolutely loved our stay,

Complimentary culinary lesson with every stay at Flemingstown House 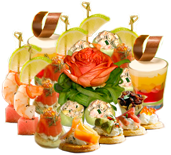 Delight in a wonderful morning or afternoon learning from the proprietress how to make a variety of delicately flavoured Canapés. Taste the delicious savories with a Pinot Grigio or a recommended Rioja on the tranquil patio 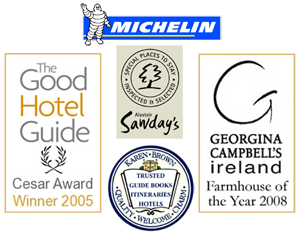 Click here to get directions to find us at Flemingstown House in Co. Limerick